AFP-Services, the photo and video contractor for the European Commission, was asked to cover the European Union’s official visit to Tehran, Iran. Eight Commissioners were present, including the High Representative, Federica Mogherini. The visit followed the lifting of the embargo and the agreements concerning the Iranian nuclear program.

The AFP-Services video and photo team consisted of two cameramen, (Edouard and Richard), two photographers (Johanna and Aref – local), and one producer (Elodie).

12 p.m.: arrival at Brussels Airport. There was a special atmosphere there following the March 22nd attacks – reinforced security measures and three hours in the queues.

5 p.m.: stopover in Frankfurt. The airport seems enormous, and the boarding gate is not very close. There was again a lot of security, and a check on passports and baggage, but no problems.

2 a.m.: arrival at the Tehran airport. The time there is +4.30 GMT. In the plane, all of the women put on their veils, scarfs or headscarves. In Tehran, one can show a few locks of hair. A delegation is waiting for us, and we drive off to the hotel accompanied by a few journalists from the BBC and Der Spiegel.

3.30 a.m.: arrival at the hotel, where all of the commissioners and the members of their cabinets are present. The team goes to bed, while the producer attends a meeting with the three spokespersons for going through the next day’s program and organising the various trips.

7.30 a.m.: meeting with the spokespersons to agree on the final details. We have two cars with drivers that will take the two teams to the various meeting venues.
Our local photographer does not respond to the emails or to Johanna’s SMS (calls seldom go through) and it is almost time to go.

8.00 a.m.: departure for the first team, consisting of Edouard and Aref, who is still not there. The Commissioner is about to leave. Aref arrives and jumps into the convoy vehicle. Had he arrived ten seconds later, we would not have had any photo coverage of that first meeting.

9.00 a.m.: departure for the second team, Richard, Johanna and Elodie. We head for the Ministry of Foreign Affairs, where the High Representative meets with Minister Zarif.

During the trip, we quickly realise that the driver doesn’t know the way … He doesn’t speak English, and stops every minute to ask for directions. We finally arrive on time, after twenty minutes’ waiting in front of the Ministry.

10.00 a.m.: Johanna and Richard set up for covering the meeting between F. Mogherini and J. Zarif. Elodie tries to get hold of the local technicians to arrange a live news conference, programed for two hours later. Without 3G, without Wi-Fi, without any possibility of calling and with the hope that the SMS sent were received in Brussels by the European Commission’s technicians.

1.00 p.m.: the two teams rejoin at the Ministry of Foreign Affairs. Somewhere between 60 and 80 cameramen and photographers are present to cover the Commissioners’ meeting with the Iranian authorities. One of them gets ready to cover the press conference, while the other records the remarks made by each Commissioner.
The live event does not raise any serious problems, and the initial transmissions begin.
A practical question: Are there women’s restrooms in the Iranian Ministries? The Producer looks for one, but she is referred to the men’s restrooms. That same situation will arise twice at other ministries.

2 p.m.: the teams are again formed and separated. Richard and Johanna are going to cover the High Representative, while Edouard, Aref and Elodie will cover various Commissioners.

3.00 p.m.: Richard and Johanna are driven by the chauffeur, who is still unfamiliar with the route. After having driven about in Tehran for an hour, they finally arrive late for the meeting and are unable to cover it. There will be the same kind of difficulty for the other meeting, but fortunately they arrive on time.
Edouard, Aref and Elodie on their part cover the three meetings at the Ministries of Oil, Culture and Sports. No problem, and a lot of luck as well. They then have enough time to have a quick lunch in a restaurant. Only men are present. Typical dish: rice, grilled chicken and cooked tomatoes.
At the time of the meeting at the Sports Ministry it becomes apparent that the Iranians do not speak English very well. When Elodie asks “Do you speak English?” in an elevator, the answer is “Four”…

8.00 p.m.: last meeting for the Commissioners’ team. They are late because of traffic jams, which are a tradition. They vainly try to get hold of a spokesman. A last recourse: the bodyguard. He informs us that we are not late and that we can come for pictures at the end of the meeting. Any contact can prove useful.

9.00 p.m.: return to the hotel for the teams, which send the last photographs and videos. Altogether, 16 videos and more than 50 photographs were transmitted during the day.

9.30 p.m.: for Edouard and Aref, the assignment is completed. The other team members are going to have dinner in a small restaurant where chicken strogonoff is served. No alcohol is served in Iran, but there is alcohol-free beer. Richard and Elodie try it, but it is not a very convincing experience, particularly for the group’s Belgian.

A single dominant idea on the way back: remove the veil. Just like you are wearing a hat or a beanie, you are hot, but the headgear remains in place.

Midnight: After a small night-time walk, during which the participants get lost (no 3G), the team returns to the hotel for a second short night.

8.00 a.m.: departure for the Ministry of the Environment for the day’s only coverage. Meeting with Commissioner Cañete.
We get into our car with the (correct) driver, and this time we are in the convoy. The van has to follow three Mercedes that charge as fast as possible through Teheran’s well-known traffic jams. It’s a wild race, without any police escort, embracing the other vehicles while avoiding the scooters. We are split between anxiety and wild laughter.

10.30 a.m.: mission completed. The team has two hours free before heading for the airport. They take advantage of that interval to visit the magnificent Golestan Palace.

Wednesday, April 22nd, 2020 at 5:43pm
Despite social distancing measures, the EU Parliament debates and votes on legislation to make sure aid quickly reaches people and countries hit by the #coronavirus crisis. An @AFP_Services video report for @Europarl_EN #Covid19 https://t.co/YEz6hzOsZc https://t.co/woCuycwkiS 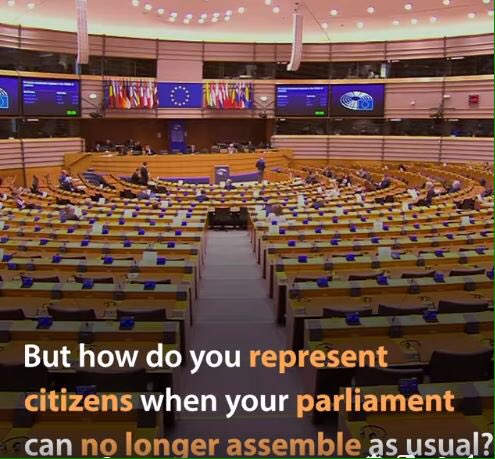 Sunday, April 19th, 2020 at 7:23pm
Members of the EU Parliament have joined the frontline fight against the #coronavirus. A video report by @AFP_Services for @Europarl_EN #Covid19 #EuropeansAgainstCovid19
https://t.co/UKRazUSoLC https://t.co/8KufPAwS57 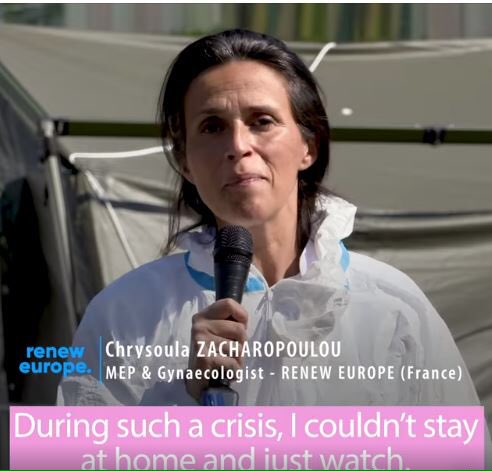